With so many photography websites out there, why choose Artistic Image. It could be for the highest quality prints, artistic abstracts, or even the colorful flowers. But it could also be that my images are never photoshopped or altered in any way. What do I mean by never photoshopped or altered? It means that outside of the basics of Adobe Lightroom, I never add elements that were not in the original image, add colors that were never there, or manipulate shutter speeds on a computer. The problem with many photographers is that they treat photography like graphic designing or painting a work of art. Major elements of their photographs are done on their computer, not in the camera.This even plays a large role in photo contests. Contestants can now win just by how well they edited their photo in photo-editing software rather than how they took their picture. Check out the image above. This double rainbow image was taken in Wyoming and was the result of being at the right place at the right time. There was no altering done to this image at all and, as you can see, it is a very dramatic image. My goal is to provide you with high quality artistic images the way that I envisioned them with my camera, not my computer. Thanks for your interest in Artistic Image! 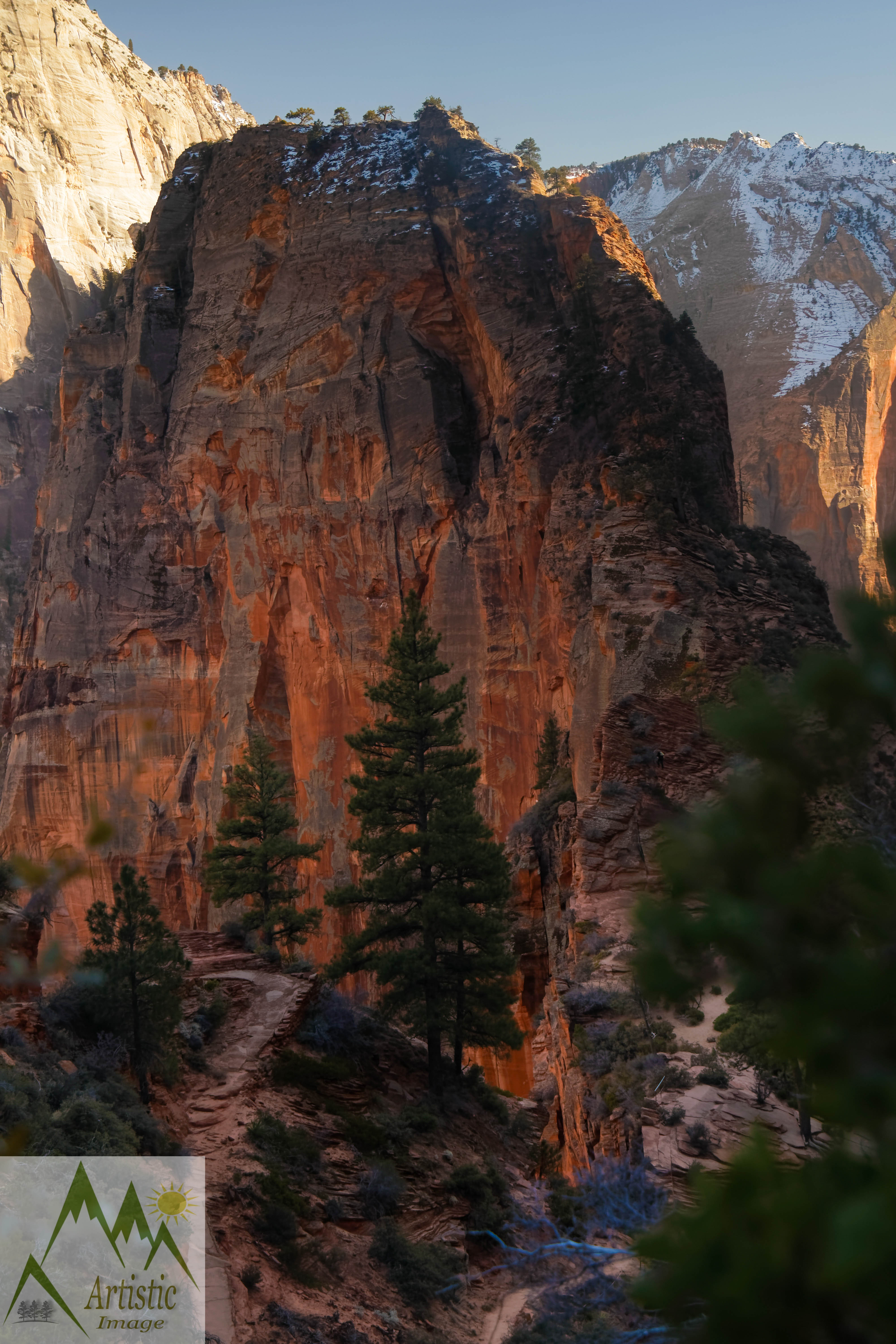 With its towering red and orange 1500ft.+ cliffs that surround you, Zion is one of the most spectacular national parks to photograph in. These massive cliffs make you feel like you are part of the park. Everywhere you gaze you can’t help but be awe inspired. The image above shows one of these cliffs.

Known simply as Angel’s Landing, this rock outcrop has one of the most iconic profiles in the national park system. It also has one of the scariest trails in any park. This trail is not for the faint of heart as it follows up the right side of the rock outcrop requiring the hiker to hold on to a chain bolted into the rock. It is important to always have a good grip on the chain as one section of the trail follows along the top of a cliff with sheer drop-offs on both sides. One of the most dangerous elements of hiking up Angel’s Landing is that you have to let go of the chain to let other hikers coming from the opposite direction pass you. This requires you to let go of the chain in some precarious locations. Doing this trail requires proper footwear as much of the rock is slippery from sand particles. This trail should be avoided when it is windy or if the rock is slippery from ice, snow, or rain.

While I didn’t climb to the top of Angel’s Landing due to the time and windy conditions, I went up the main trail some more to capture the image that you see above. This trail contains many other spectacular vistas, including looking back at Angel’s Landing. From a photographer’s perspective, it is more impressive to look at Angel’s Landing than to be on it.